Over 70 years of exceptional service!
Home > About Us>Our History

Baraga County Memorial Hospital was opened in October of 1952 after six years of planning, fundraising, and construction. It all began with a petition circulated by Peter Peterson regarding the establishment of a hospital in Baraga County. Prior to that date, the closest hospital was 35 miles away in Hancock. Ben Grobaski interested the Lions Club in getting involved and the project was launched. Support was obtained from state officials and the health department. The W.K. Kellogg Foundation became involved as advisors and their foundation ultimately ended up financing the radiology and laboratory departments. 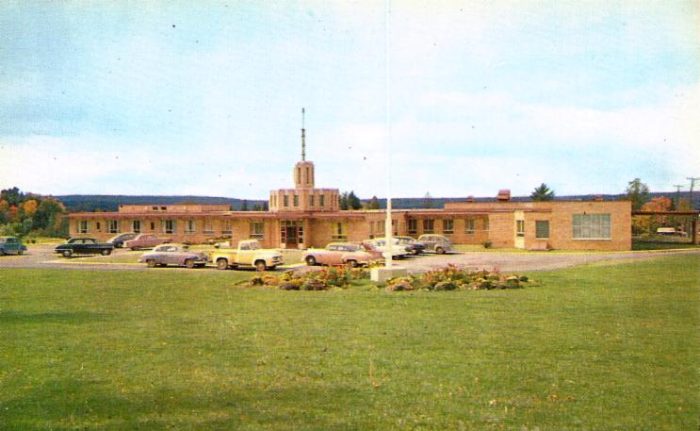 Baraga County received 60% of the financing from the federal government, but the other 40% of the construction and equipment costs needed to be raised in the community to complete the project. A special election was held in August of 1949 for the purpose of submitting to the legal voters a proposition for voting for an issue of hospital bonds in the amount of $200,000 for the purpose of erecting a non-sectarian public hospital. This was passed by an overwhelming majority.

The first Board of Trustees was then selected and they had to make the decision of where the hospital would be located and what the hospital would be like, and who would do the construction work. The groundbreaking ceremony was held on May 15, 1951, and the first administrator was chosen in January of 1952. The administrator, Wilma Cooper, began the work of selecting and purchasing equipment, setting up the hospital organization and records, and hiring and training personnel.

A Finance Committee sponsored a Hospital Fund Drive in May of 1952 and undertook matching the monetary gift given by the Ford Motor Company. They were successful in this endeavor and obtained enough funds to take them “over the top” of the required amount.

In a direct quote from the BCMH Dedication Program from the ceremony held on October 12, 1952, “It is impossible, in recording the manner in which the Baraga County Memorial Hospital came into being, to name the dozens, scores, and even hundreds of Baraga County citizens who generously and untiringly donated their time, effort, and financial support, so this hospital might come into being.”

At the time the hospital opened its doors, it was a 35 bed facility. Within three years, over 4,000 patients were admitted, and the hospital sought to expand. In 1963, the hospital increased to 72 beds. To accommodate changing healthcare needs, the 1992 renovation project resulted in a new outpatient wing with a bed count of 24 acute care and 28 skilled nursing unit beds, for a total of 52 beds. With the changing face of health care, BCMH was designated as a Critical Access Hospital in May of 2000 and at that time included 15 acute care, 28 skilled nursing unit, and 9 swing beds.

In March of 1988, Baraga County Memorial Hospital became designated as a Health Facility Corporation under Public Act 230, PA 1987, and is incorporated and existing under that Act.

The hospital has expanded its businesses in many ways during the past several years. Baraga County Home Care & Hospice was established in 1997, and a durable medical equipment business, Baraga County Medical Equipment followed which dispenses home medical equipment. The hospital became the owner of the Winkler Nursing Home in 1995, and since that time has replaced that 59 bed nursing home with a new, modern facility with the help of a donation from Dr. And Mrs. Louis Guy, named the Dr. Louis and Anne Guy Bayside Village.

In 2011, to again accommodate the changing face of healthcare, Baraga County Memorial Hospital moved into its new, up-to-date, patient-friendly facility on U.S. 41 in L’Anse, which includes the latest healthcare technology available. The new hospital was several years in the planning and was built with the assistance of guaranteed financing through the Department of Housing and Urban Development (HUD). The new facility has 15 acute care beds which include 9 swing beds. The emergency room is state-of-the art and includes four private exam rooms, in addition to a trauma room. All equipment in the diagnostic departments was updated as needed to meet the latest technology. With the move to the new facility, the physician practices owned by the hospital, Baraga County Medical Practice which was purchased by the hospital in 2000, and Bayview Family Practice, purchased in 2004, were consolidated into one practice, Baraga County Memorial Hospital Physician Group. This consolidated practice is located in the hospital building to provide for the convenience of the area residents, and includes family and pediatric practices. Specialty clinics continue to be provided at BCMH, now being located within the physician clinic in the hospital building. The current clinics include the specialties of Cardiology, General Surgery, Oncology, Ophthalmology, Orthopedic Surgery, Urology, and Pain Management. In addition to the physician clinic being located at the hospital, the building also includes a retail pharmacy, and conference center.